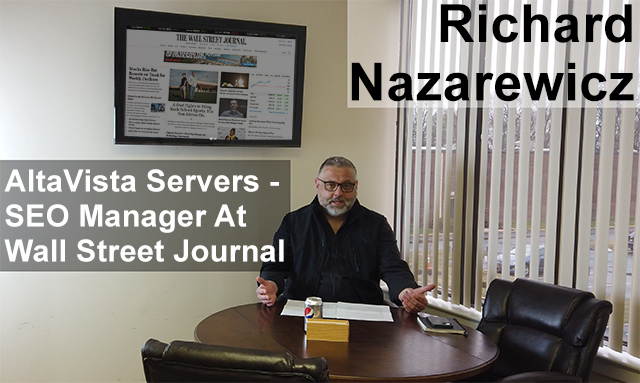 Richard Nazarewicz is the Technical SEO Manager at the Wall Street Journal and I was supposed to visit him at the WSJ offices over a year ago before COVID occurred, but then COVID happened. Instead, we both got vaccinated and then met in my office because his office is not fully open at the moment. We were still socially distant because we’re good at not being social. We talked a little bit about transitioning to work from home and other things.

Nazarewicz is an old time freak, he worked at Digital Equipment Corporation (DEC), he did servers and storage and had some AltaVista servers in the corner, yes AltaVista was made by DEC in 1995. Compaq acquired DEC and Compaq was acquired by Hewlett Packard. He eventually left HP to start his own agency in Spain in the early 2000s, doing search marketing, website development, web apps and more. He did that for a couple of years or so, then moved to the United States and worked at a few agencies there, and eventually took a job with the Wall Street Journal after a recruiter contacted him.

When he joined the Wall Street Journal, there were the bones of an SEO team there, and he and his team built an impressive in-house SEO team. He said the management really bought into SEO and that helped the growth a lot. He also said they had their own kind of paywall, but then when Google introduced Flexible Sampling the Wall Street Journal switched to that solution and that was great for them.

Approaching Tech SEO for a Global News Organization Like The Wall Street Journal:

Richard created a schema early on to see how all the data points, how everything interacts with Google, how it leads to traffic, and much more. Much of it was standardizing the stack, the technology stack, even using the same 404 on all pages. The WSJ even has a lot of WordPress sites on subdomains of wsj.com, so it manages that too. Therefore, the company still manages several technology stacks. Richard then described the structure of the SEO team at the Wall Street Journal.

You can find out more about Richard Nazarewicz on Twitter @richardnaz.

You can subscribe to our YouTube channel by clicking here so as not to miss the next vlog where I interview. I have a nice series of interviews planned with SEOs and SEMS, many of which you won’t want to miss – and I promise to keep improving these vlogs over time. If you would like to attend an interview, please fill out this form with your details.